Writing a post about springtime blooms this week carries with it a bittersweet poignancy.  We look to the leafing of the trees, to the flowering of the spring plants, and especially to the appearance of ephemerals that flourish for a brief beautiful time before retreating again into the earth, to assure us that nature goes on in a cyclical dance of emergence, growth, maturation, and decline, that after a pandemic, however diminished, we will go on as well.  But let us not delude ourselves. Nature does not go on as before.  There is no eternal normal.  As poets and philosophers are fond of reminding us, we can never step in the same river twice.

Yet, I am surrounded this week with those unfolding leaves and unfurling petals, and it is lovely.   I’m happy to share some of what is going on around me with fellow gardeners, and readers can, too, by following the Propagator’s guidelines for Six on Saturday.

1. I’ll begin with an update on the little “let’s see what happens” garden put together with big-box sales of tulip bulbs and Knock Out Roses I mentioned previously.  The featured image shows the first of those tulips to open.  Others have since bloomed in a surprising combination of pink and yellow.  On the whole, I’m pleased.  The roses are continuing to grow, promising some rich red flowers in the future.  In fact, buds are begging to appear.

2. Another quick update is in order.  My SoS post two weeks ago featured a red buckeye (Aesculus pavia).  When I went back this week to check on the blooms, I discovered that a smaller tree next to the featured one already had a single mature flower.  Then I realized that several fruits from last year had developed into healthy plants.  In the third photo below, the shell of the seed remains attached to the growing plant.  Looking around, I found at least six new buckeyes.  I have a grove!  Most of the trees are fewer than six inches, or 15 cm., tall, but I do have “a group of trees”; therefore, I’ll claim a grove.

3. Next I want to feature one of those spring ephemerals–my favorite in fact–rue anemone (Thalictrum thalictroides), which is a woodland native to eastern North America.  It is one of the first wildflowers to appear on the understory floor among the brown leaves. 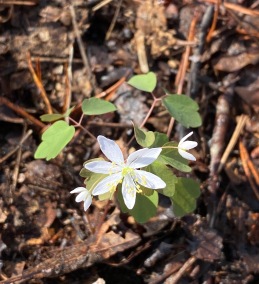 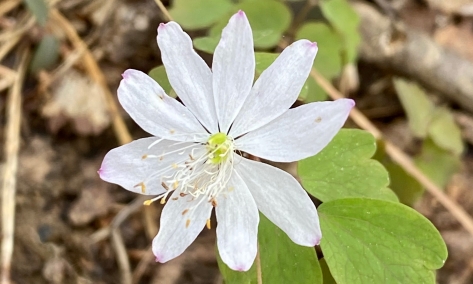 4. Early in the week, a pleasant, sweet aroma caught my attention after a night of particularly hard rain.  The source was a blooming native American holly (Ilex opaca).  A pyramidal tree-sized holly, it is a familiar, healthy Southern landscape plant–both deliberately planted and freely appearing due to the abundance of those bright red berries.  Below is the bloom cluster on the left and the flowers with last year’s fruit on the right. 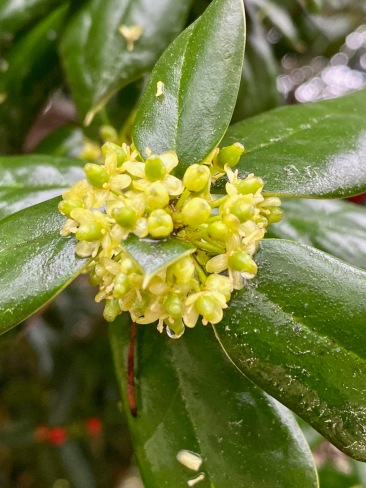 When I returned to the holly tree the next day, it was clear that others were attracted to the fragrant aroma as well.  Please forgive the lower quality of the photos that follow, but I was standing amid a loud buzz of several bees that I could not identify, as well as those I could.  There were red wasps, honey bees, a Black Swallowtail butterfly, and a Eastern Tiger Swallowtail, the State Butterfly of Alabama. 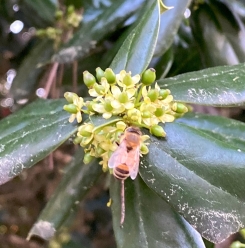 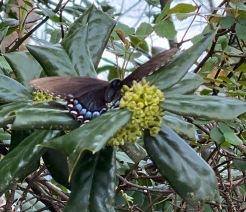 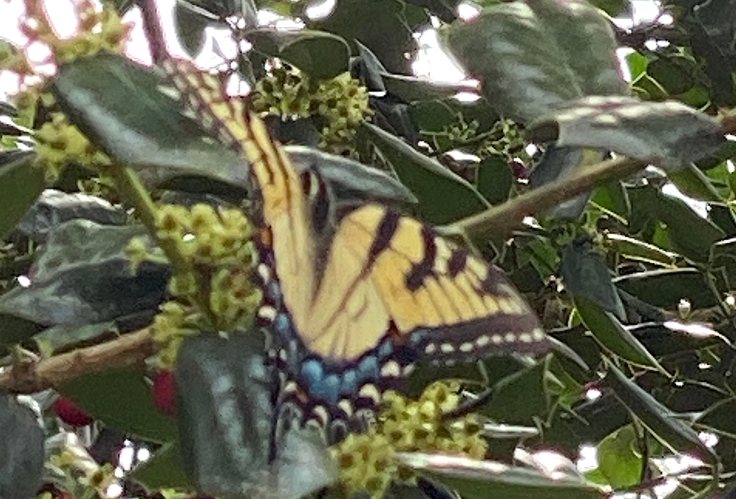 5. In the first set of holly photos above I was playing with the capture of raindrops on the flowers.  Similarly, I tried to capture the rain droplets on the young leaves and the catkins of an American hornbeam, or Carpinus caroliniana. This eastern North American native has a beautiful grayish flouted trunk.  Sometimes called iron wood, the hornbeam is a particularly hard and heavy wood, not good for woodworking but great for tool handles, wheels, and bowls.  In the back of my memory is a remembrance of the name hornbeam coming from its use as beams in ships.  But, as I say, that is in the back of my memory.

6. My last entry is really a fall purchase–a leaf shredder.  The promotional material for it promised reducing 16 bags of leaves to one.  Frankly, I think that might be close to true.  What I know is true is that it has helped me create some very nice mulch out of huge piles of leaves I could not access with a lawn mower.  The last photo below is of an area next to the driveway that needed filling.  I began using the shredded leaves as fill last autumn. The demarkation between filled and non-filled areas is clearly identifiable.  The leaves have broken down nicely and created an acceptable growing medium already. 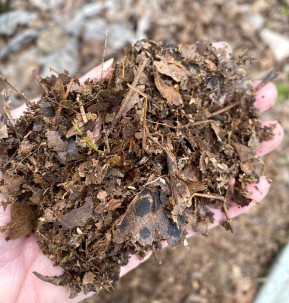 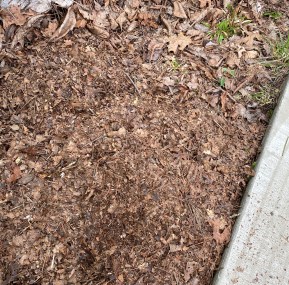 This past week, shredding decaying leaves to create mulch for a couple of garden beds was very satisfying–maybe even cathartic.  It gave me a sense of accomplishment, of being environmentally responsible, of making something useful for tomorrow from the debris of yesterday.   So may it be for all of us in various ways in the coming days.  In the meantime, may you all be safe, healthy, and creative.