N.B. to those of you who follow After Eden on email, please click on the name of the post to the right of my gravatar photo to open the blog on WordPress in order to see the featured photo and to see a better layout and higher quality photos.  I recommend this in general, but for this post it is especially worthwhile.

When I began After Eden, my intent was to reflect upon gardens and gardening as an attempt to establish loci of peace and beauty reminiscent of the Garden of Eden—places of security, serenity, and surety—and as a human attempt to demonstrate to ourselves that we can tame Nature’s wildness and hold the wilderness at bay.  However, changing weather patterns and unprepared for pandemic indicate that our control over Nature is precarious at best and delusional at worse.  Even before the events of the last week, though, a visit to Iceland offered me a related epiphany about Nature, Eden, and the Earth.

Iceland is a volcanic island of stark geological variance: glaciers, waterfalls, geysers, fumaroles, earthquakes, volcanoes, lava columns, black beaches, and auroras.  Formed about 25 million years ago, it is one of the Earth’s youngest and most volcanically active landmasses.  It is also the site of some of the world’s most primal beauty, the scale of which captures our place in geological time.  What follows are some reflections on that variance and beauty based on a winter visit.  As such, the photos below are many and full-sized.

Skógafoss Falls provides a visual touchstone for the scale of both geological size and time that composes the beauty and wonder of Iceland.  Photos that at first seem to be in black 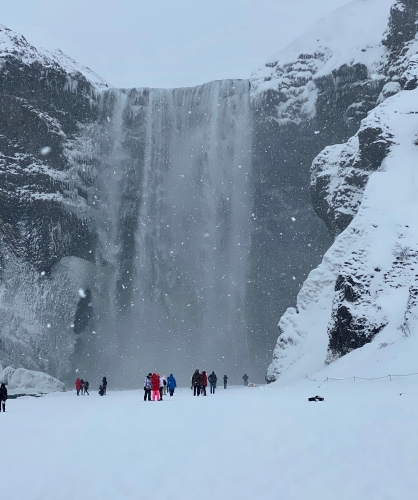 white emerge in color with the recognition of a red or blue parka in the blowing snow.  Eighty-two feet wide with a drop of 197 feet, the falls makes obvious the force of water and the terrain of the island.

Similarly, Seljalandsfoss that falls 200 ft., impresses with its size and rugged drop.  Having its origin under the Eyjafjallajökull glacier, its geology also underscores a point I’ll return to below. A volcano beneath Eyjafjallajökull erupted in 2010, disrupting air traffic across Europe. 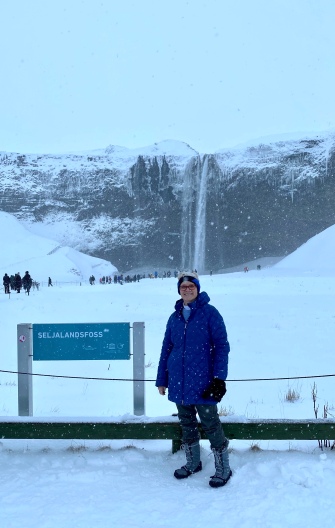 The calm of Eyjafjallajökull and the stunning clarity of the sky on the day the photo below was taken belies the power of that eruption a decade ago—and the hidden force of volcanic activity that lies beneath the glacial mountains.

Goðafoss waterfall in the north of Iceland astonishes not with its fall but with the expanse of its semicircular width.  It supposedly takes its name from the action of an early 11th-century parliamentary lawspeaker and priest of the Old Norse gods charged with deciding whether the Icelanders should officially accept Christianity.  The decision was in favor of the new religion, and he threw the idols of the old gods into the waterfall in his journey home.  In early March of the 21st century it seemed a fitting monument to Odin, Thor, Freya, and Loki. 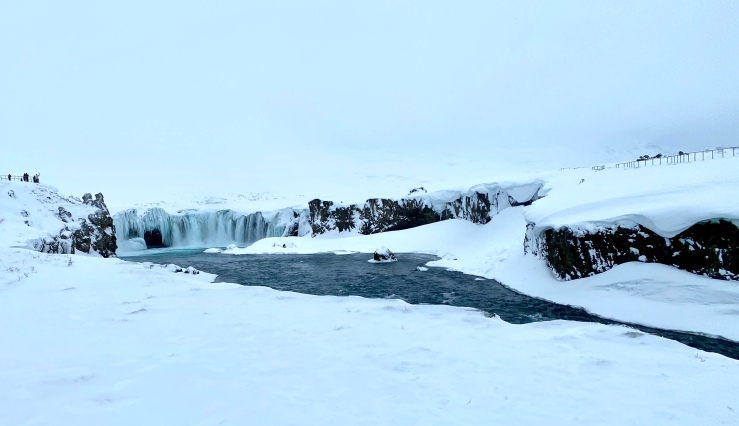 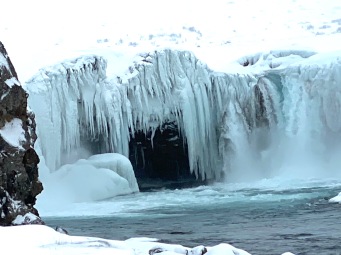 In southwest Iceland, the tiered falls Gullfoss, or the Golden Waterfall, works its way through basalt lava layers forming a deep and magnificent gorge.  At one time it was thought that the extraordinary hydraulic force of the falls might be harnessed as an energy source.  Not surprisingly, that proved impractical, and the falls is now managed by The Environment Agency of Iceland.

The four picturesque falls above are but the prologue to the geological astonishment that is Iceland.  The “Golden Circle,” named for Gullfoss, encompasses three sites that illustrate that geology: the falls, the Geysir geothermal area, and Þingvellir National Park.  And now to the point of this post, which is not a travelogue, but a reminder that our planet is not under our control.

Within the sight on one another, steam vents bubble though the mud with posted warnings of water over 100 degrees centigrade and the Strokkur Geysir erupts approximately every 10 minutes, blowing water, steam, and evidence of Iceland’s subterranean geothermal power 50 feet or more into the air.

While these sites serve as impressive touchstones to the reality of the hot spot that lies beneath the Earth’s mantle in Iceland, Þingvellir National Park embodies a beautiful, if stark, reminder of our place in European history and 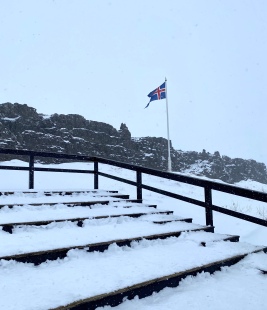 geological time.  Þingvellir was the place of Iceland’s parliament or Althing founded about 930 CE and held there until 1798.  It certainly brought back to me memories of a course in Old Norse taken at The University of Virginia several decades ago.

However, its deep effect on me was the rugged Almannagjá gorge that runs through the park. Here lies the rift between the North American and the Eurasian tectonic plates, between portions of the Earth’s outer crust that have moved and continue to move away from each other. 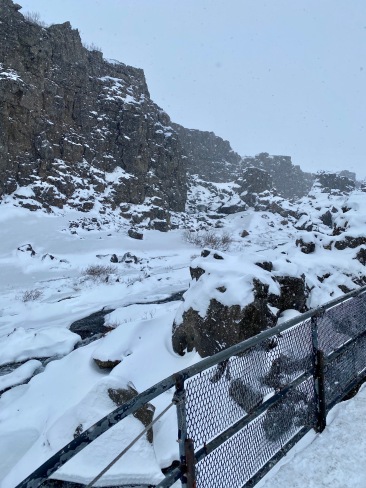 Walking through the gorge to the west and looking back over the icy waters running through it to the east, put that moment of time in March 2020 in humbling perspective with Time.  So too, Dimmuborgir’s lava pipes standing in sharp relief against the snow-filled skies appear to be remnants of long abandoned pre-history fortifications as its English translation, “Dark City” or “Dark Castles,” would suggest.

And troll faces frozen in lava rock, like the one above, revive perceptions that thrived in an age that I associate with time before what T. S. Eliot called the 17th-century’s poetic dissociation of sensibilities.  Imagination, wonder, and enigma are also enlivened by Iceland’s displays by the Aurora Borealis, caught below with the help of a fairly steady hand and a night-light sensitive lens. 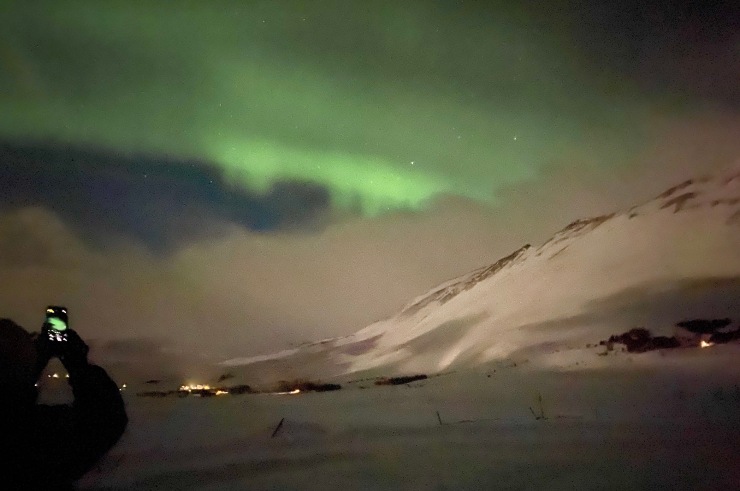 This post offers nothing of the culture and cuisine of Iceland.  Both are worthy of a post on their own.  Certainly, I feel compelled to visit this country again in the spring or summer when the blue lupine blooms and the mosses soft and green emerge from the melting snow.  This post is about the land, the Earth’s mantle, the volcanic power and geological activity that makes this island’s environment beautifully alive and primal.  It is about a reminder that we do not control the earth beneath our feet any more than we control the waters and the winds that cover and encircle the lands we claim, cultivate, and care for.  It is about a touch of time before Eden.

I close with two final photos, one for the environmental splendor of the country, one for the kindness of the people I met and for their respect of that environment.  Both are taken from the same place, one looking toward the Black Sand Beach at Vik, Iceland’s southernmost village, and one taken toward the snow-covered hill above.

8 Replies to “before Eden”