When I think of “academic” gardening (some might prefer to call it horticulture) in Alabama, I automatically think of Auburn University.  After all, the Alabama Cooperative Extension System is housed there and at Alabama A&M, with most of the horticultural research being done at Auburn.  Moreover, the Alabama Master Gardeners program is a program of ACES, and all of the ACES staff I know are connected to Auburn.  I was admittedly rather surprised, then, when looking for a local garden to visit to see the Arboretum of the University of Alabama and another at Troy University listed in a website of Alabama botanical gardens and arboretums.   Autumn is not the optimal season for viewing flowering plants, but I figured that trees might provide some display of color and an arboretum is a great place to find trees.

Tuscaloosa is closer to Trussville than Troy, so that is where I headed with the help of my Jeep’s GPS—which was no help at all.  I always told students to read the introduction to a text.  You often find useful information in introductions.  If you decide to visit the UA Arboretum, read the website directions; you will find useful information there.   GPS set to the arboretum’s mailing address will take you through a close little neighborhood on a winding road, over railroad tracks, past men working on some dangerous-looking electrical boxes who glare at you suspiciously, to an inhospitable closed gate labeled “staff en

Follow instead the online directions, which will lead you to an official looking sign. But don’t think that you have arrived at the place.  There is a paved area to the left of the sign that forks.  Continue to follow the paved path and you are on a UA outdoor running track.  Follow the dirt road that veers more to the left, and 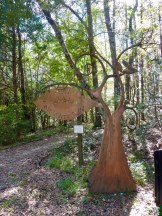 in a mile, you will arrive at the arboretum marked with a less official, but far more accurate and artistic sign.

The 50-year old, 60-acre facility has a welcome center, greenhouses, wildflower, butterfly, and children’s gardens, a pond, classroom facilities, and plans for renovation and growth.  One of the site’s most intriguing features is an outdoor amphitheater, a lovely setting for a wide range of activities. 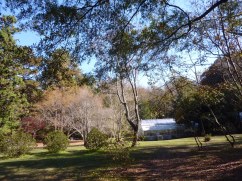 Except for the amphitheater, I was expecting to see everything I found there.  The one thing I was not confident about finding, though, was good identification of the trees and plants.  I actually have a love-hate attitude toward labeling in specimen gardens.  Or maybe, it is a hate-hate attitude toward plant signs.  I hate it when they are not there, and I can’t identify something.  I hate it when a public garden looks like a farmer’s market of flora.  There is something about a stake that violates the natural beauty of the scene—something that transforms the mystery of creation into a methodical catalog.  I can’t imagine Eden with a thousand little plaques when Eve and Adam finished their naming inventory of Paradise.

If the initial entry sign to the arboretum was a little confusing, the identification of the
trees was, nonetheless, useful and unobtrusive.  Trees near

the paths were clearly identified, and the wildflower garden was designed well with the little silver signs strategically placed.  And it is certainly good to know what something is if you decide you want one for your own garden.

All of this labeling made me  think about my own garden and how often I forget the botanical names of the plants I have—sometimes I even forget the common names.  But what I don’t forget is who gave me specific plants.  When I look at them, I don’t think, “that is forsythia.”  I think of Marge who was my neighbor on 39th Street and who moved to Highland Lake.  That’s how I came to find my place there.  Marge who could grow anything from a stem or a leaf.  Marge who gave me a lanky stem of forsythia with a wisp of roots that I have 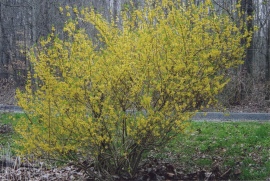 propagated additional plants from since.  Marge who was a no-nonsense, steadfast friend during a really tough period in my life.   The patch of the notoriously misnamed herbaceous perennial obedient plant (Physostegia virginiana) in the featured photo for this post also came from her as did several other perennials when I began planting at the lake over 20 years ago.  The plant spreads by

rhizomes with amazing assertiveness, but it blooms in late summer and fall and is a playground for bumblebees.  So, while I work to control it, I will always keep at least one patch going, for Marge and for the bees.

There are many plants at the lake that were given to me by fellow Master Gardeners, other friends, and former students.  I know the names of all of the gifters.  I feel sadness when one of the plants does not prosper.  Some of them have died, especially in the aftermath of last year’s drought.  But I remember the spot where there used to be a Harmony hydrangea given to me one spring by Carson and Ben, even if the plant is gone.

A greater sadness is that a few of the givers have died as well.  I cannot look at my tall curly leafed pine (Pinus strobus ‘Green Twist’) without thinking of former BSC chemistry professor John Strohl, without seeing his face, without smiling at his taunts, his humor, his kindness.  The tree was about a foot tall when he gave it to me.  I love the twisted needles of this pine, which I fear was severely stressed as well in last year’s drought.  John gave me another tree that I treasure.  One that a tornado took the top out of several years ago, but one that lives on strongly.  John was well-known for gathering the tender sprouts that grow under the Ginkgo tree by the west door of Munger Hall on BSC’s campus.  He’d pot them, foster them, and find homes for them.  Mine has grown well and gives me a glorious display of gold each fall, and reminds me a friend and a career. 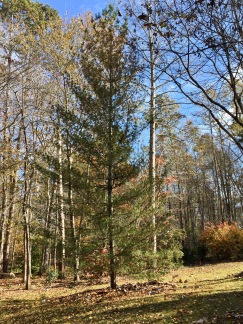 So, maybe I should label my plants not with their botanical names but with their human linage.  They mark friendship; they mark time; they mark generosity.   They embody the memories of lives that grew at one time together.  And even if those lives grew apart, were torn apart, or are just temporarily distanced, the memory lives in the garden gift.