I’ve been attending a number of presentations and workshops at the Birmingham Botanical Gardens lately.  As I would expect is true for many of you, one of my favorite gardens there is the Japanese Garden.  After a preview of the BBG’s fall plant sale one afternoon, I went to the garden, camera in hand, intent on focusing on how the garden plays with shapes of trees, shades of green, and size of foliage.  Most gardeners are familiar with the hallmarks of Japanese garden design:  the call for water, for bridges, gently curving paths, for stone lanterns, for places of repose, and often for the Shinto inspired torii gate marking the entrance to the garden and a transition into a sacred space. These are not gardens of kaleidoscopic surprise; they are places of harmonious juxtaposition of nature’s own artifacts, trees and shrubs, stone and sand, wood and water.  Their colors are the colors of earth tones and the delicate blossom shades of flowering cherry, peony, camellia, azalea, chrysanthemum, hydrangea, and anemone like those in bloom that day. 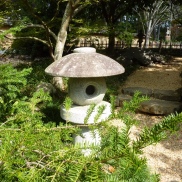 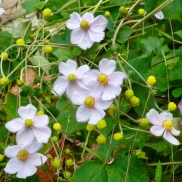 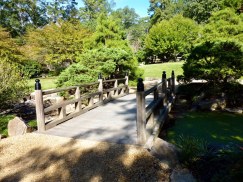 Opened in 1967 by the Japanese Ambassador to the United State, the garden has the traditionally expected features, a seven waterfalls stream with stone and wooden bridges, a lake with koi, varieties of Japanese maples, a bonsai house, a tea house and other cultural pavilions in its seven and one-half acres.

But it also has that feature I went to the garden looking for—that wonderful combination of foliage color, shape, and size 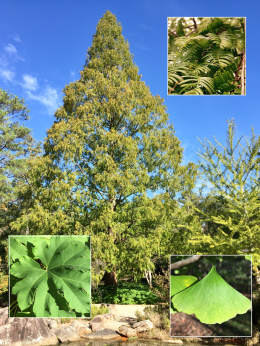 in harmonious juxtaposition.  The best example I can offer of this is the garden’s tall Dawn Redwood (Metasequoia glyptostroboides) with a lawn of rice paper plants (Tetrapanax papyrifer) at its feet and a Ginkgo biloba tree, positioned to its left in this photo.  The difference in leaf contour and color for all three is stunning.  From the feather-like opposite arrangement of foliage along the stem of the Dawn Redwood to the graceful fan-like structure of the Ginkgo leaf, to the huge dinner-plate size of the deeply cut palmate rice paper plant leaf, this arrangement is a summer range of greens waiting for red and gold in the fall.

This combination of plants is as interesting in its similarities as in its differences, though.  Each is in its own way singular.  Both the Dawn Redwood and the Gingko date from the Mesozoic era.    The Dawn Redwood is the last living species of Metasequoia glyptostroboides and the Gingko is the sole survivor of the division Ginkgophyta. Both are called “living fossils.”  The rice paper plant is the only extant species in the genus Tetrapanax.

There were other contrasts in bark, branching patterns, and color palette in the garden that caught my eye, but what stopped me short and caught my breath had no plant in it at all.  It was the Karasansui, or dry landscape garden, within the Japanese Garden.  The seemingly solidity of the stone garden with its monochromatic greys and off-whites stood in sharp contrast to the reds, golds, and green I had been viewing.   A placard provides a little background on the garden style, claiming it to be “most likely an adaption of Chinese Stone Gardens” and “intended to bring about a calming influence to those who view it.”  And as I viewed it I realized that it was not monochromatic.  Rather, it was 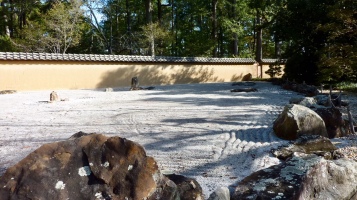 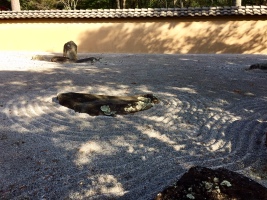 constantly shifting in color as the sun went behind and emerged from clouds, as the wind moved the branches of trees whose shadows skirted across the raked gravel.  And, with each shift in sun and shadow the garden was anything but static.  I could see seas, and islands, and mountains breaking through clouds.  I could see rivers, and waves, and rhythms of movement and time.  All of this was wonderful and “Zen,” whatever we Westerners mean by that.  What struck me most, though, was the last line of that informational placard:

“As with all gardens, this garden is to be viewed and enjoyed.”

“As with all gardens. . ..”  All of a sudden, I became a very self-conscious and guilty gardener.  I labor in my garden; however, I rarely take the time to muse over the fruits of that labor.  Certainly, this is not for lack of places to relax and think.  Seating in the garden is a given.  As Lorraine Harrison notes in How to Read Gardens, “Rare is the garden that contains no shady seat or bench from which to enjoy a prospect.”*  I have the requisite benches and chairs strategically positioned for good views and for pleasant repose.  But I don’t sit on them.  I look at my garden.  I think about it.  I think about what might be planted, pruned, moved, or missing.  I think about its beauty.  My intent is to create beauty.  But I do not often think about what it leads me to think about.

The difference between that placard and my practice was well stated in an article in Garden Guides by Carol Wallace.  Drawing a distinction between our gardens and the Zen or contemplation garden with its minimalist, abstract design intended to encourage “one to look deeper and complete the picture in one’s own mind,” she concludes, “Not so the typical western garden. There we have plants in abundance. The area that is designated as water is really wet and the only raking we do has a purpose – to eliminate all the clutter that nature and the neighbors have left blowing about to annoy us. We can go sit in the garden looking for inner peace, but we are more likely to find a few weeds that need pulling, and a lot of deadheading and other chores that will nag at us until we give up thoughts of contemplation and get to work.”

I believe that with a little more contemplation there is another post waiting to be written on this difference.  In the meantime, though, I will take time in BBG’s Japanese Garden to watch turtles sunning themselves in Long Life Lake and imagine koi swimming through the clouds to play among the trees.