This week I have colorful blooms, squirrel damage, an unknown, and an amphibian.  Before I get to them, though, I want to note the site that serves as the host of “Six on Saturday.”  Visit The Propagator’s blog for guidelines for participation, another great six, and links to many more.

1. My first is the Stella d’Oro daylily (Hemerocallis “Stella d’Oro”) of the featured photo.  That, and the images below, are from the front garden–the one that gets the most sun.  This popular daylily deserves its reputation.  With dutiful deadheading it is a hardy re-bloomer, and I have them growing in three different locations in the garden, all the progeny of a few original plants I purchased several years ago.  In the first photo below, notice the Ladybug, or Lady beetle, or Ladybird beetle, depending on where you live.  Being a medievalist, I’ve always preferred to call it Our Lady’s bug.  According to the “etymology” of the name, during the Middle Ages, tiny insects were devastating crops in Europe.  In answer to the prayers of people for relief from the infestation, the Virgin Mary sent a swarm of small orange, black-spotted beetles to devour the pests (which might have been aphids).  In appreciation for her intervention, the medieval farmers dubbed the beetle, Our Lady’s bug.  There are other etymologies and Mary related associations with this little beetle, regardless fair warning: to kill a Ladybug is to risk the Virgin’s displeasure.

2. For the second bloom, I return to the woodland phlox (Phlox divaricata) I mentioned two weeks ago.  Several are in bloom now among ferns and hosta along the dry creek bed.  Standing tall as they do, they are attractive bright spots in the otherwise overwhelming green picture.

3. I featured the white hydrangea and colorful pot below in a different photo on Wordless Wednesday.  I wanted to come back to it, though, for some background.  In 2017, the plant was a gift from a student I regarded highly.  It was her college graduation year and my retirement year.  The hydrangea prospered well during the summer and fall; unfortunately, it suffered a hard winter.  The following spring it had declined to the point of being a stick and a deformed leaf.  Transplanted into a small pot with enriched soil, given very special care, and repotted twice, it was a healthy plant by last spring and summer–regrettably though, with no blooms.  Consequently, I consider this year’s flowering a personal victory three years in the making.  The flower heads are a bright white with a lovely tinge of lime green. 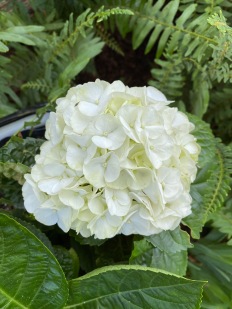 4. As for the squirrel damage, they keep digging in the planter I started some Asclepias tuberosa, or butterfly weed, seeds in.  Today, I repositioned a few of the seedlings and spiced the planter liberally with cayenne pepper.  Reportedly, squirrels don’t like red pepper;  I’ve used it to discourage them from raiding bird feeders with limited success in the past.  We’ll see what happens this time.

Fortunately, the plants that I gathered the milkweed seeds from last year are doing well in the sun garden along with the Stella d’Oro daylilies this spring.

5. The unknown, or more accurately the incompletely identified, is this plant apparently in the blueberry genus.  Is it Vaccinium elliottii, Elliot’s blueberry or mayberry?  I don’t think so; it is a very low growing native bush.  If anyone recognizes this, please pass the identification along.  It is growing in the wooded area of the garden. 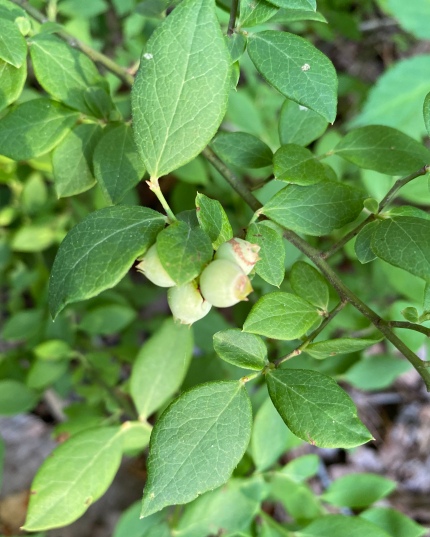 6.  Finally the amphibian.  When deadheading some roses and cleaning up debris in the bed, I almost picked up this fellow who was expertly camouflaged.  It is an American toad.  He (or she) was still there the next day, but not today.  If he shows up again, I guess I’ll have to consider getting a toad house.

Toads are reportedly good luck signs, but also symbolize a need to adapt to change and do tasks we are called upon to do even when we don’t want to.  Given that Covid-19 infections and hospitalizations are on the rise in Alabama, I hope all of my fellow gardeners in the State will be encouraged and inspired by this toad to be cautious and wise.  I hope everyone else is safe and being careful as well.  It is much easier to stay at home if home includes a garden.