After a very dry late summer, recent fall rains have revived many of the shrubs in the garden, but I have very few fall blooming flowers–and those that are blooming are ragged at best.  In fact, most of the shrubs and trees turned drought-brown before taking on any fall color; however, I do have a few photos to share.  You can see what other gardeners around the world have to share by checking in on the Propagator’s site and scanning the comments and links.

1. The ginkgo in the featured image is number 1 of six.  It is beginning to take on its autumn gold.  I’m particularly fond of this tree because it grew from a seedling gathered under one of two an iconic ginkgo trees on the campus of the liberal arts college where I taught for 41 years. Several years ago a tornado took out the top of this tree, which has recovered splendidly.  In the image below, you can also see some bright red color of  maples. 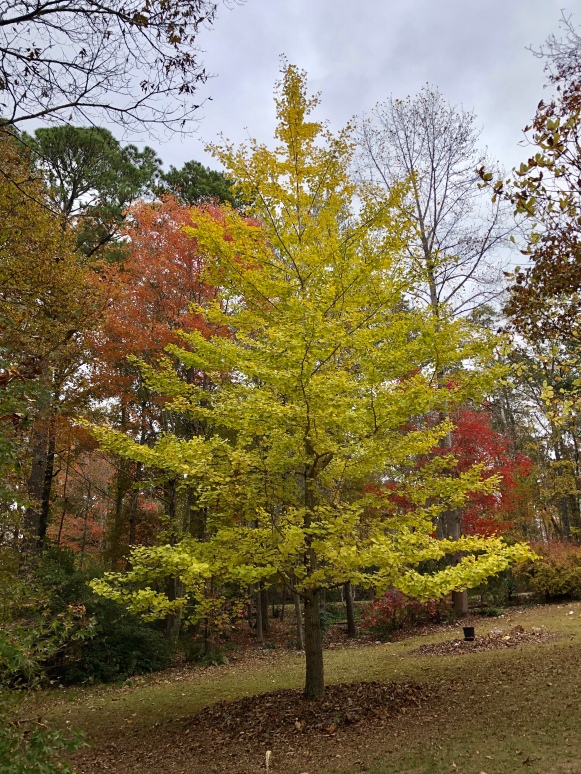 2. A hosta provided some unexpected color this year.  This Blue Angel hosta had already been turning yellow due to heat and drought.  With the recent rain and unusually fluctuating temperatures, it turned the color below.

3. A witch-hazel shrub (Hamamelis virginiana) gave me my happiest surprise recently–it bloomed.  Not much.  But it bloomed for the first time since being planted well over 10 years ago.  Now, in all fairness to the tree, I planted it in entirely the wrong place.  It does not get nearly enough sun.  It is a North American native, and Wikipedia, that source of all knowledge, claims that Fellow of the Royal Society Peter Collinson introduced Hamamelis virginiana to English gardens in the mid-18th century.  I’m sure the blooms that attracted him and his fellow gardeners John Bartram and Benjamin Franklin were more impressive than this plant’s half dozen modest flowers.  Nonetheless, I was excited to see them.

4. The burned orange color of these mushrooms sprouting from the root system of an old oak tree reminds me of all the amazing things that go on unseen in our gardens and forests.  Called Jack o’lantern mushrooms for understandable reasons, Omphalotus illudens grows in clumps on decaying stumps and buried roots of hardwood trees.  The trunk of the host oak for this flourishing of mushrooms is entirely gone; regardless, this is the third or fourth appearance of mushrooms along its root system. 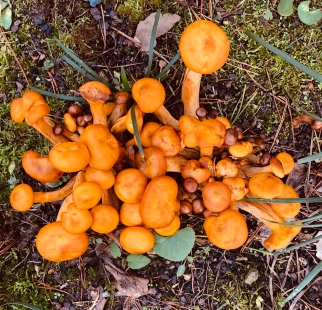 5. On the topic of unseen garden life, the fifth image also touches on decaying trees. In the center right of the first photo above there is a 3-gallon pot siting on the stump of a diseased pine I had to removed earlier this year.  I recently lifted the pot and a thin section of tree-trunk I had placed on the ground stump to find these creatures below. 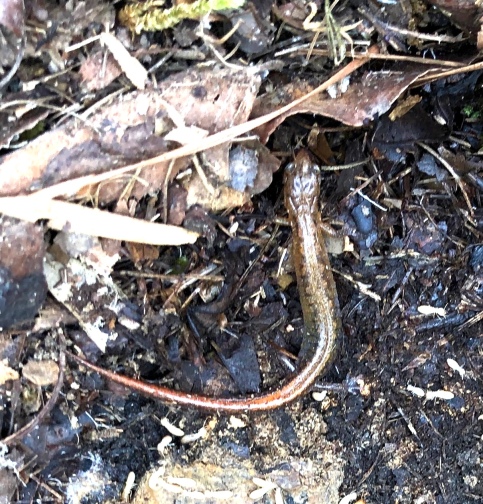 The termites I dispatched.  The centipede I allowed to find its own way to cover.  The salamanders I nudged into safety and recovered them.  The section of pine trunk I placed on the burn pile.  The plan is for this area to be a small rose garden after treated for disease.

6. Over the past year the banks of a small, dry creek bed that runs through the wooded part of the garden had flattened out.  Recent heavy rains had softened the ground so that last week I could give the creek bed some shape again.

Places along the ditch could be deeper still, but Rosie says it will do for now.  And I always do what Rosie says.