It has been a few weeks since I’ve published a Six on Saturday post, but I’ve been following several other global gardeners and the meme site initiated by The Propagator.  I hope that some of my readers have done the same.  I do have, though, six things to pass along for this next-to-last Saturday in August.  I begin with two signs of the end of summer.

Mountain Mint (Pycnanthemum spp.) is one of my favorite natives.  It has a great aroma, is popular with lots of pollinators, and very easy to grow.  Even though it is at the end of its blooming season, it still attracts visitors, as with this as yet unidentified insect, which I believe from database comparisons is related to wasps.  [correction:  this is an Elephant Mosquito (Toxorhynchites rutilus), largest North American mosquito, non-biting, and nectar sipping.  Thanks to Debbie Pezzillo, friend and untiring researcher.] 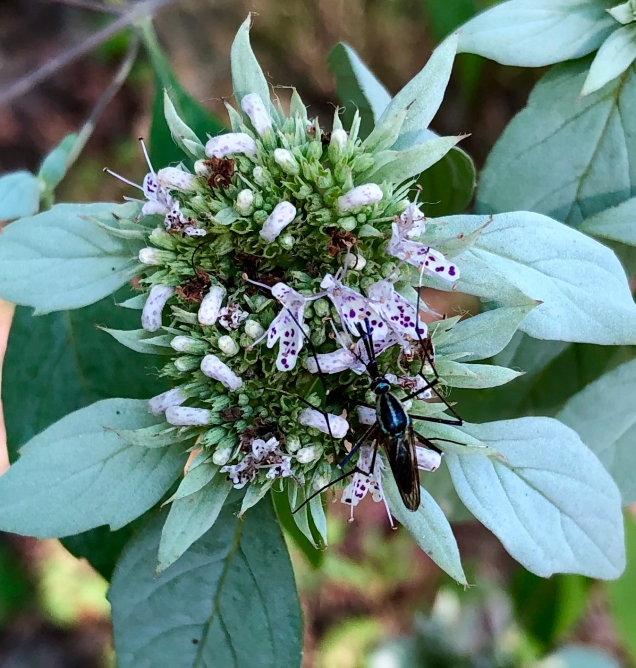 2. Ground cherry, (Physalis), a late season discovery, appeared between two trees in the midst of some peacock fern.  I have no idea whether this plant is a gift from the birds, or something that was just waiting for the right time to break through the soil and grow.  An herbaceous plant in the same family as the common tomato, there is nothing in its botanical description that would explain why it appeared where it did.  If I’ve misidentified it, I hope some wise reader will set my record straight.

3. The white mophead hydrangea, or Hydrangea macrophylla, in the featured image was little more than a dry stem and three pea-sized leaves at the end of the winter.  Transplanted from ground soil to a pot with enriched soil, moved to a better location, and nurtured dutifully, it is far healthier today.  There were no blooms this year, but I hope that with continued special care there will be huge white flowers next year.

4. American beautyberry (Callicarpa americana) is one of two plants I am looking forward to seeing in full development.  From all indications, there should be a healthy supply of purple berries very soon.  I’ve planted a few beautyberries in the garden, one standard, one variegated–that has never done well–and one dwarf variety in a pot.  The ones that seem to prosper best, however, are ones that have come up on their own, such as the plant below on an uncultivated hillside.  Apparently, they know better than I where they will be happy.

5. Japanese anemone (Anemone hupehensis var. japonica) is a plant I’ve had uneven success with.  But this particular gathering, among lantana and hellebores, seems to be doing well.  The closed flower buds, though not as attention grabbing as the flowers, are nonetheless appealing.  For me, part of the attraction of anemones is that they remind me of summers in Oxford, England, and of other lovely gardens I’ve visited in the UK.

6.  My final entry is something that just pleases me–a yard sign verifying that my garden is certified by the National Wildlife Federation as a wildlife habitat.  Certification is not an involved process by any means.  One simply needs to provide wildlife with, as the plaque says, “food, water, cover, and places to raise young.”  It pleases me not because certification was hard to achieve but because I see public reminders of the importance of wildlife protection as vital in current conditions of threatening climate change.