Obviously, the featured photo above is from a few months ago when I first started thinking about this post.  But with so many wildflowers blooming at Highland Lake this spring, my attention turned to Six on Saturday—that fascinating collaboration started in the UK by The Propagator in which global gardeners feature six things about their gardens, whether photos of plants, tools, potting benches, or ways to fight slugs.  I don’t want to abandon my former After Eden themes, though. So, in this post I’m returning to one from October 2017, “the parable of the redbud” with an update on the tree and the thoughts. 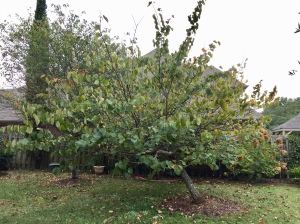 to the “human desire to make of nature what we will and human inability to turn away from beauty we want even when we know it will not prosper.”  In other words, it was about planting trees in conditions that are just not good for planting.  But it was also about our, or at least my, hesitancy to remove a tree I like even when it is clearly in decline. Instead of removing the diseased tree with a drastic tilt to the south in 2017, I kept pruning for as much balanced as I could achieve.

While I can take credit for a more balanced tree in 2019, I can take no credit for a still living tree.  Yet, living it is.  The stunning dark pink blooms and the rich maroon, heart-shaped leaves continue to appear.  Below are three photos of the tree this past spring. 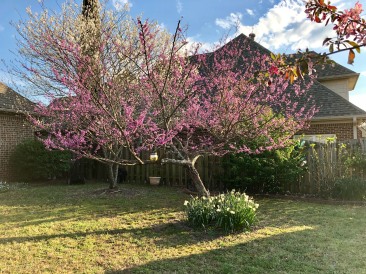 This redbud has now taught me a new lesson: persistence.  I may not be able to make nature do what I want her to, but nature can do some amazing—and unexpected—things on her own.  Nature taught me two other lessons this spring as well.  The second has to do with pruning and persistence, too. But, it also displays plants’ phenomenal ability to rejuvenate.

In the by now legendary Alabama drought of fall 2016, I lost several Japanese maples.  One of them I eulogized in the poem “The One of Many” published in the nature poetry journal, The Avocet, (see https://aftereden.blog/2018/10/20/late-and-soon/).  Another, a seven-foot red-leafed Japanese maple, was reduced to a leafless architecture of dying branches.  As with the redbud, I did not want to give up on it, though.  So, I pruned it rather drastically—and waited.  In the photo below, the severe prunes made down to live wood and just above potential budding points can be seen at the blunt ends on each of the three main branches.

This spring the tree reached about five-feet high and is filling out well.  As with the redbud, there is a story of persistence here; it speaks to me more loudly, though, of the extraordinary capability for rejuvenation found in the plant world.  Otherwise, what gardeners in the Southeast refer to as “crepe murder” would, in reality, end in the death of crepe myrtles in thousands of commercial and homeowner landscapes.  The second lesson, then: regeneration. 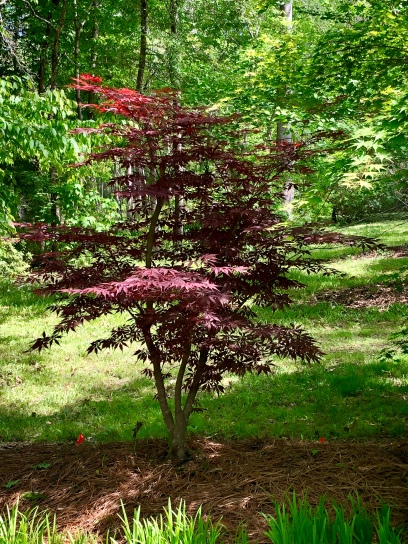 The third lesson goes a step beyond regeneration to resurrection.  Its focus is a rose planted very much in the wrong place in 1992 or ’93.  The name of the rose was ‘Fire and Ice.’ Its petals were a deep velvet red on the inside, but a muted white on the underside.  I planted it before trees had fully leafed out, greatly misjudging how much sun the rose would get.  In the end, it simply did not get enough, and I transplanted it to another location.

Since that time, a tornado, straight line winds, and judicious removal of large tree limbs have opened the original planting spot to more sun.  Although I thought that I had captured all of the rose bush in the transplanting more than two decades ago, much to my surprise the bush reappeared a couple of years ago.  This year it bloomed for the first time.  The roses were rich scarlet, and wonderful.

No longer white under the red petals, many of the blooms, nonetheless, had a residual white streak. 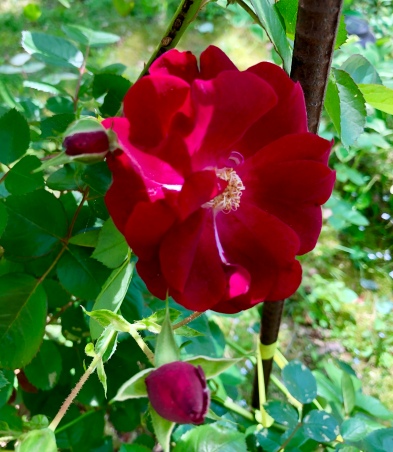 Obviously, I missed some bit of a rose root in the transplanting of the 90s, and it lay dormant in the earth for years and years.   I like to think of its breaking ground again as a resurrection.  I am fully aware, however, that it did not come back exactly the same as it left.  And maybe that is a collateral message to nature’s lesson of resurrection after Eden.  In seeking the repose and peace of the garden in the chaos of the current political, social, environmental, and spiritual climate, the lessons of the redbud, the red Japanese maple, the Fire and Ice rose—the lessons of persistence, regeneration, resurrection—give us hope.  But they also give us counsel.  New life does not mean another old life.