I’ve certainly been off of my intended schedule of one post about every three weeks.  It has been a few more weeks than three since my post on the Koutoubia Gardens, also known as Lalla Hassna Park, and the Jardin Majorelle in Marrakech. The delay, though, is certainly not because I have lost interest in gardens and gardening.  Quite the opposite, it has been because I have been gardening.  When I returned from Morocco I found all of my successful late winter tidying of the garden at the lake exploded with the energy of an abundant sun and rain Alabama spring. 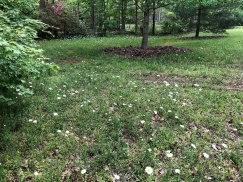 Irises, native azaleas, and daisies seemed to be everywhere.  But so did honeysuckle, wild blackberry, catbrier, and greenbrier vines.  There was considerably more tidying to be done.  And there were also other gardens to visit

The last week in June I visited a friend who lives on Jekyll Island off the coast of Georgia.  The purpose of the visit beyond the obvious one of spending time with a friend of 30 years—and the not so obvious purpose of spending time with another medievalist—was to visit the squares in the city of Savannah and in two other nearby cities that adopted some version of the 18th-century James Oglethorpe plan for city design.  Before the outing to the squares, however, we visited a beach on the north end of Jekyll known as Driftwood Beach, a land mass already suffering significant erosion, then hit hard by hurricanes Matthew and Irma in 2016 and 2017.  There is a section of the beach nicknamed “the boneyard” for obvious reasons. 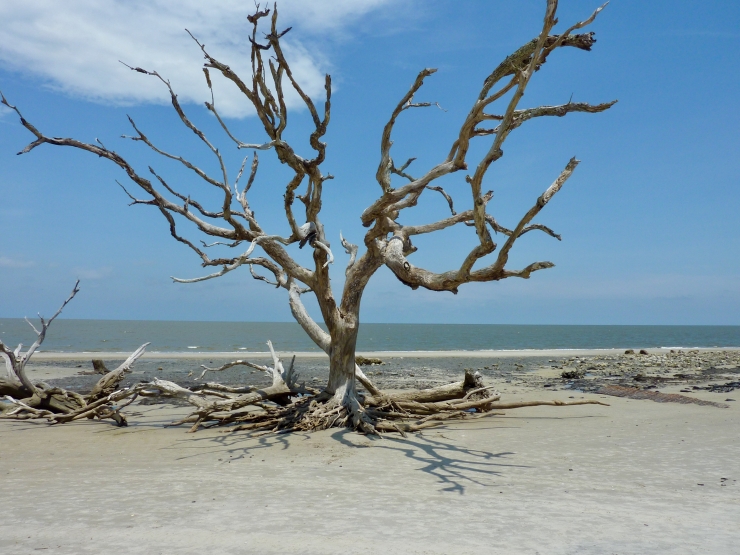 The path from the road to the beach opens up on this stunning sight.  Coming out of an insect humming, humid, marsh on mid-day sand that burned my feet through the open straps of my sandals, the bark-less, bleached, beauty of this tree immediately took on the significance of everything that perishes, persists, and is endangered in this post-Eden world.  Wow, reading that last sentence to myself makes me feel like alliteration spilled all over it.  But at that moment an epiphany of timelessness washed all over me.

Immediately to the left is this tree, one whose root system could not withstand the winds of Matthew and Irma.

The dense, but surprisingly shallow roots of the live oak, Quercus virginiana, make it susceptible to falling in strong winds when a tree is isolated without additional understory vegetation to help anchor it spreading root system.  We are far more accustomed to seeing this quintessential Southern tree as I found it in the historic section of Jekyll Island, spreading in graceful arches to touch the earth, decorated with Spanish Moss like mid-summer tinsel. 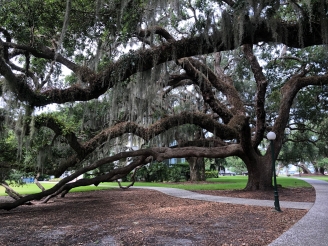 The second photo above shows the thick netting of roots that once held this tree upright.  It seems paradoxical that such a long-lived tree with wood strong enough to be a favorite of shipbuilders can appear to be so easily lifted from the surface of the land.  Resistant to disease and decay, and with a wood weight of up to 75 pounds per one cubic foot, live oak was a preferred construction material for 18th-century American shipbuilders—and gave the USS Constitution its nickname “Old Ironsides.”

And here is the reason for the live oak’s strength.

These swirls in the grain of the wood give it its solidity, but bleached and lighted by the intense coastal sun, they also appear to be some primordial sculpture representing plant, and water, and cosmos.  The movement in the deadwood is astounding.  The texture was wonderfully smooth, although the embedded swirls were deep.

There was more art in this boneyard garden, though.  In the same exposed root system, immediately to the left of the wood shown here was the structure pictured below.  At first, I did not see it.  Then its snout emerged, then an eye, a jawline and neck, a chest, and a severed leg.  This deadwood garden was very alive.

Driftwood Beach is only accessible during low tide.  So, when I wanted to return the next day, we had to go very early in the morning, as early as sunrise.  The color of the sky, the ocean, the silhouettes of the upended and broken trees, both live oaks and coastal pines, was simply picturesque.  The featured photo that opens this post shows this same root system backlit by the sun just emerging above the ocean horizon.  Below are a series of photos as the sun began to rise and the clouds began break.  A little above the midline in the third photo, you can also see that the birds were beginning to fly. 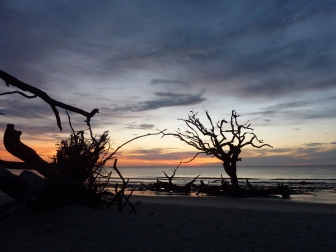 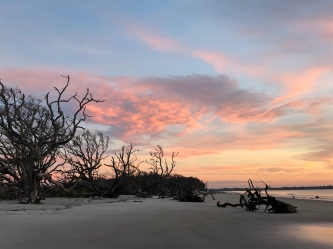 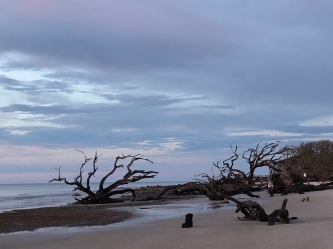 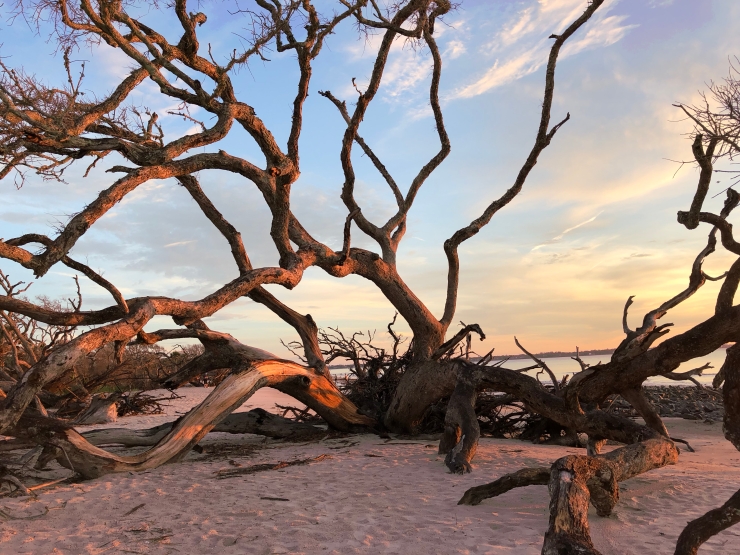 A hundred yards or so farther to the south of this site, past some scraggly beach palms and harsh grass, vegetation grows and white egrets roost in the trees.  The beach, though receding and battered by hurricanes is alive.  There are birds, and tiny crabs, and turtles laying their eggs. 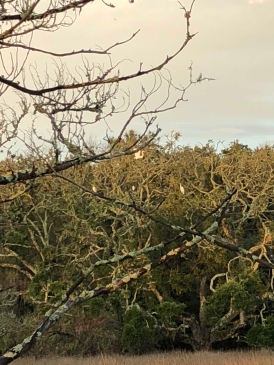 North, or Driftwood, Beach on Georgia’s coastal Jekyll Island may be a boneyard of dead trees, but it is also a natural sculpture garden of unexpected beauty to be found After Eden.  It is also a garden of time and persistence.  It is a popular place for weddings, timed by the tides, and staged by the sun, sand, rocks, and wind.  Interesting.  I close with another photo of that first tree I saw upon entering the beach.  The angle is a different.  The time is sunrise rather than mid-afternoon, but the timelessness remains. 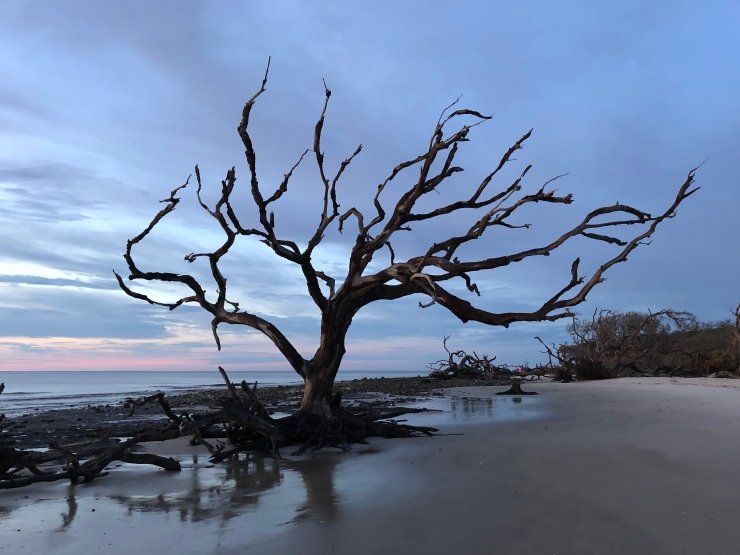 7 Replies to “deadwood and sunrise sculpture”