As I begin writing this, it is cold in Alabama—not cold for Alabama, cold in Alabama.  It is midafternoon and only 26 degrees, with a wind that makes it feel like 16.  It even snowed a snow that stayed around for more than a few hours a couple of weeks ago.   Another winter storm threatens today.  The average low for the month in the Birmingham area, according to the Alabama Tourism Department, is 33 degrees Fahrenheit, and the average high is 54.  We’ve only hit those averages about four times so far this year, and the forecast doesn’t promise much warmer weather for the next five days.   But this post is not about the weather; it is about one gardener’s shifted point of view due to the weather.

Were the temperatures and the breezes more accommodating, I’d be outside in the late mornings and afternoons preparing beds, doing my best to eradicate honeysuckle vine and greenbrier (Smilax) of various types, disciplining English ivy (Hedera helix) and Vinca major ‘variegata’, and working on makeshift terracing on the hill between the house and the lake.  In other words, I’d be focusing on, looking at, the ground.  I’d be digging in it, pulling annoying vines out of it, moving rocks around on it, looking up only occasionally to locate a chattering squirrel, check out a chirping bird, or watch some honking geese fly overhead.  And then attention would shift back to ground, especially while working on the hill.  Even in the seasonal average high temperatures I have no desire to slide down the incline on wet leaf mold and into the lake.

Instead of working and focusing on the ground recently though, I’ve been looking out the window at birds and squirrels working the multiple feeders I have for them.  There is a lovely variety of common birds: White-breasted Nuthatches, Northern Flickers, Black-capped Chickadees, Tufted Titmice, Carolina Wrens, House Wrens, Pine Siskins, and for vibrant splash of color, Northern Cardinals.  Best of all though, there are at least two pairs of Eastern Bluebirds and a Downy Woodpecker. 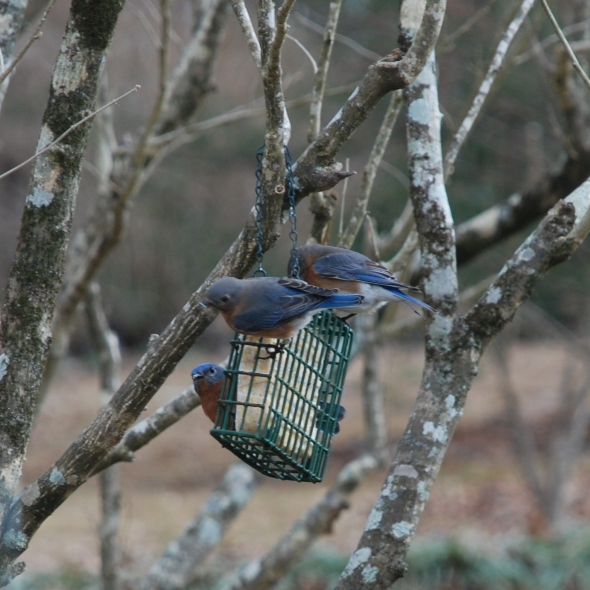 But I have also been looking up at the trees—the shape of their branches, the color and textures of their bark, the damage of straight-line winds and twisting tornados, the markings of lichen and mosses and funguses, the evidence of boring insects and hammering woodpeckers.  When the trees are in leaf, these things are often hidden;

when the view is spring-green, lime-green, and cream white with buds, or fall gold, red, and orange, these things can’t push forward to demand our notice.  Just look at the difference, though, between my Ginkgo bright with fall foliage and stripped to its skeleton in this winter’s cold.  A tree’s leaves, like our own best attire, can camouflage essential structure–and the beauty of natural shape.  In doing so, they can also mask idiosyncrasies and deviations in shape.  Notice the slight offset of the trunk midway up the naked tree.

This is the point at which a tornado snapped the top out of this tree in 2008, violently modifying its natural branching structure.

But deviation, or imperfection, in structure does not necessarily mean a loss of attractiveness–much less a loss of wonder.   Nature has created a defiant balance out of the asymmetry of destruction.  Multiple vertical branches emerge from the damaged trunk asserting the tree’s insistence on life and continued growth.  The experienced gardener knows that the garden is not the seat of perfection, but rather the site of persistence.  The gardener knows that trees in particular have an amazing ability to heal themselves from either a well-positioned collar cut in pruning or, sometimes, even a rending lightning strike or tornadic event.

I do not know what happened to this Poplar.  Maybe it is a victim of the same tornado.  It

was in the villain’s path.  Although a hardwood, Poplar is easily worked.  Did the rotating winds twist the tree into a cork-screw oddity?  Did lightning snake its way down through the tree’s outer surface in an instantaneous flash?  Whatever happened, it has healed itself in an extraordinary way.  It is scarred, but it still stands next to the soft, straight, smooth grey specimen beside it.  And it offers suggestions to the imagination impossible for the other trees

surrounding it.  There is even one place that you can see through the middle of the tree.  I remember the first day I noticed the rising December sun seeping through the center of it. The light is not easy to catch.  You have to be looking from just the right angle; the sun needs to be at just the right angle.  But when the sun is bright, it breaks through.  Not exactly England’s Stonehenge or Ireland’s Newgrange at the winter solstice, it is nonetheless Blount County mystical.

If what we can glean from winter trees can remind us that all that is beautiful and inspiring is not mirrored symmetry, they can also remind us that all that is life-giving is not at the apex of living.  Gardeners know the importance of decaying matter to the vitality of soil and plants.  We compost.  We mulch.  And if our own Eden is large enough, we leave a few dead trees standing.

Below is a dead Dogwood that I had let stand in place for years before wind took it down this fall.  It has been the home to many organisms as well as the hunting ground for woodpeckers, as evidenced by the characteristic oblong holes.  I will now use the fallen tree trunk as a border for an understory shade bed or a path, and it will come to house a new community of organisms, including large horned beetles and fungi and bacteria.   In and under the wood, under the leaves, below the soil, nature will create yet another type beauty as much a part of the garden as the daffodils that are coming up six feet from the fallen deadwood. 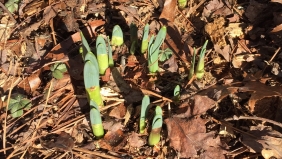 In nature’s damaging winds, tornadoes, lightning, and “unseasonable” weather, there is a humbling lesson about the limits of our control over any spot of earth we think we own.  But we should be humbled as well by nature’s ability to create new and unconventional forms of beauty out of sudden destruction and in the natural process of decay.

5 Replies to “when you can see the trees”