1. This Saturday I have three blooms from the garden and three curiosities.  I’ll begin with the feature image, Rhododendron alabamense.  This delicate deciduous native azalea, also know as the Alabama azalea, is small, about five feet tall.  Its tubular flowers begin to appear before or along with the leaves, and they have a soft, spicy fragrance.  It is identifiable by its prominent stamen and splash of yellow; unfortunately though, the flowers have a rather short life.  Still, they are worth waiting for every spring.  Rosie, the photo-bombing Cairn Terrier with leaves on her muzzle in the image below, is an added beauty for this first of six. 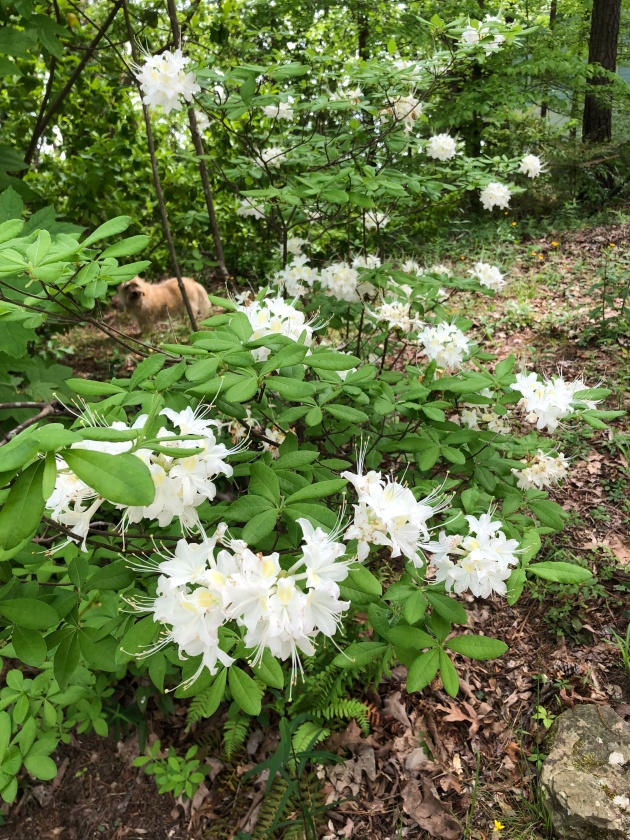 2. Mapleleaf viburnum (Viburnum acerifolium), another small deciduous native, is also in bloom.  It takes its name, as one might expect, from its maple-like leaf shape.  The small white flowers arranged in cymes will develop into dark blue berries in late summer.   A generously branched shrub that can be nearly as wide as it is tall, this is a great understory shrub–if there is space for its wandering growth habit, or what the US Department of Agriculture calls “thicket-forming” habit.  As seen in the second image, it can provide a bright spot–if an untamed shape–in a wooded area. 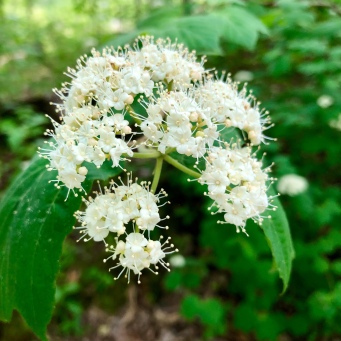 3. My third bloom is also white, but it was not one I look for year after year.  Quite the opposite, it was a surprise to notice this past week at the base of a large white oak.  While I

have planted lots of ajuga as ground cover or space filler over the years, I have never planted the white flowering form (Ajuga repans ‘Alba’).  I’m going to give this gift-of-nature single plant pictured below some space and hope that it is true to ajuga’s quickly spreading habit.  I often find the typical  blue ajuga, or bugleweed as it is more commonly called, coming up in places it has chosen for itself.  I just lift it carefully and transplant it in places I have chosen.  I hope the Alba form prospers so that I can eventually do the same with it.  Until then, I’ll protect it where it is. 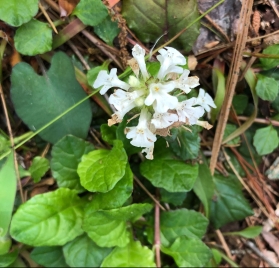 4. A fringetree, or Grancy Greybeard, continues the white theme. The species below is Chionanthus retusus, or the Chinese fringe tree, not the native Chionanthus virginicus, but it has the same delicate, elongated white flowers suggestive of an old man’s beard. I include the photo below in this post because of how I captured it shortly before a storm.  The usually vertically hanging flowers were blown out horizontally in the rising wind.  I don’t think I have taken any other photo so suggestive of wind, motion, or oncoming storm.

5. The final two items reflect my fascination in finding plants in curious places.  The Wake Robin Trillium below is growing in the branched trunk of a bigleaf magnolia (Magnolia macrophylla).  This deciduous magnolia with the largest single leaf and single flower of any North American plant is native to the Southeast US.  I often see it with multiple trunks, but I never found those trunks supporting a family of trilliums before. 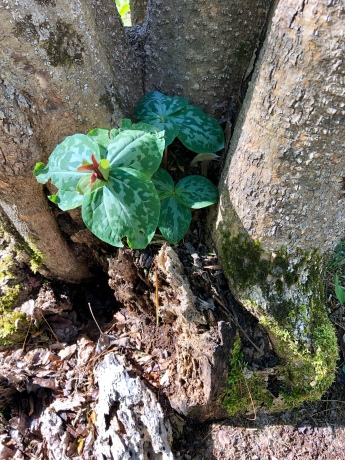 6. The second curiosity and last of the six for today was found growing out of a tree stump.  A small wild ginger seems to have taken up habitation in the decaying stump.

I really don’t have more to say about this image, other than that is has a faerie world air about it, and I taught medieval literature long enough and have enough Irish heritage in me to know that you just don’t mess with faerie.

Others can take part in Six on Saturday by following the guide found at “the propagator’s” blog, https://thepropagatorblog.wordpress.com/2017/09/18/six-on-saturday-a-participant-guide/.