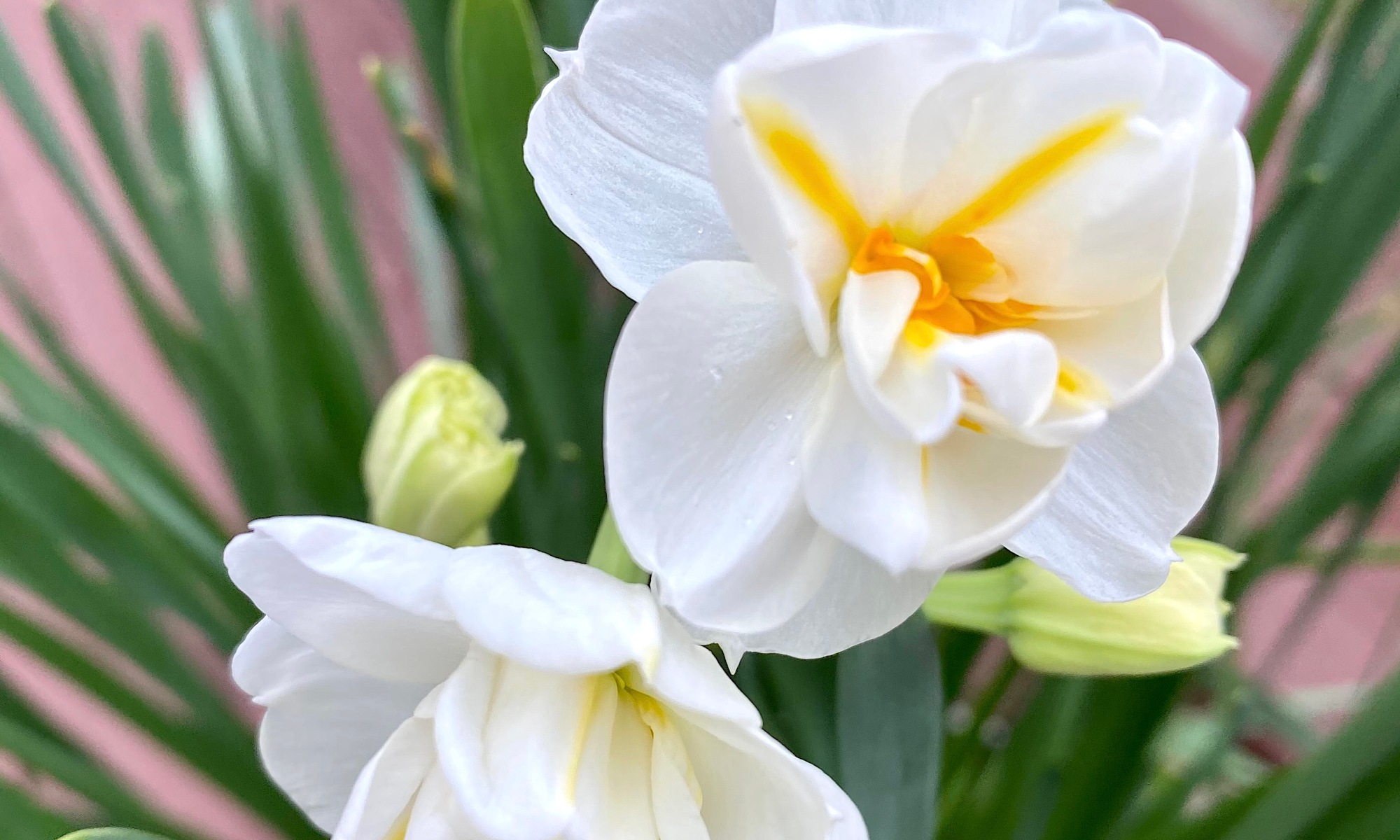 I’m posting much later than usual this Saturday after a Thursday of watching at least 14 tornadoes skip across Alabama, sitting for a while in my safe place with a bicycle helmet on, and discovering that the storms blew out my internet modem and now not-so-smart tv. Surely there are already dozens on lovely SoS posts available from gardens in more hospitable climates. Just check the Propagator’s site and follow some links in the comments or look at the guide and add your own six. Still, here are six quick entries from me.

1. First is a daffodil, although I have always considered these to be “narcissus” because of the multiple flowers on one stem. I realize that this is rather arbitrary, still early naming habits stick, don’t they. The originals came from my mother’s garden in Baltimore County, Maryland about 15 years ago. They have multiplied vigorously, and I have planted them in pots and beds throughout the garden.

2. Next are the Ice King daffodils that I planted this fall. I’m glad I got this shot earlier this week because Thursday’s storms were hard on them.

3. Another vigorous plant that is popping up throughout the entire lot is the grape hyacinth (Muscari), which is native to Eurasia but perfectly at home in the United States and northern Europe. In the photo below it has grown up between the rocks and gravel around a fire pit. I suppose I have the birds to thank for such wide distribution.

4. The Camellia japonicas continue to bloom, but one with far more healthy flowers than the other. Many of Grace Albritton’s smaller pink buds have survived the wildly fluctuating temperatures, but it is hard to find a Lady Vansittart Sport flower that is not seriously frost damaged.

5. The few tulips I have are growing, but only one blooming so far.

6. Finally, I want to share an experiment. After the trees leaf out, there really is not much sun around the house–even shade plants have a little problem growing. There is an area of ivy I pulled out around a forsythia and a couple of althea shrubs that just called out for some pots and brightly colored flowers, but it is a very shady spot. So, I wondered whether a few glass blocks to reflect the sun could create a microclimate for a few colorful plants. Rights now, there are three hydrangeas on the blocks and one hosta. I’ll replace three of those with more colorful pots and annuals. The rest of the plan is to have liriope grow among the blocks to cover their sides. I’ll update over the summer.

So, that is a quick rundown of the garden this week. Hopefully next week’s weather will be kinder and I can check in with six wonderful native wildflowers. Stay safe. Stay well, everyone