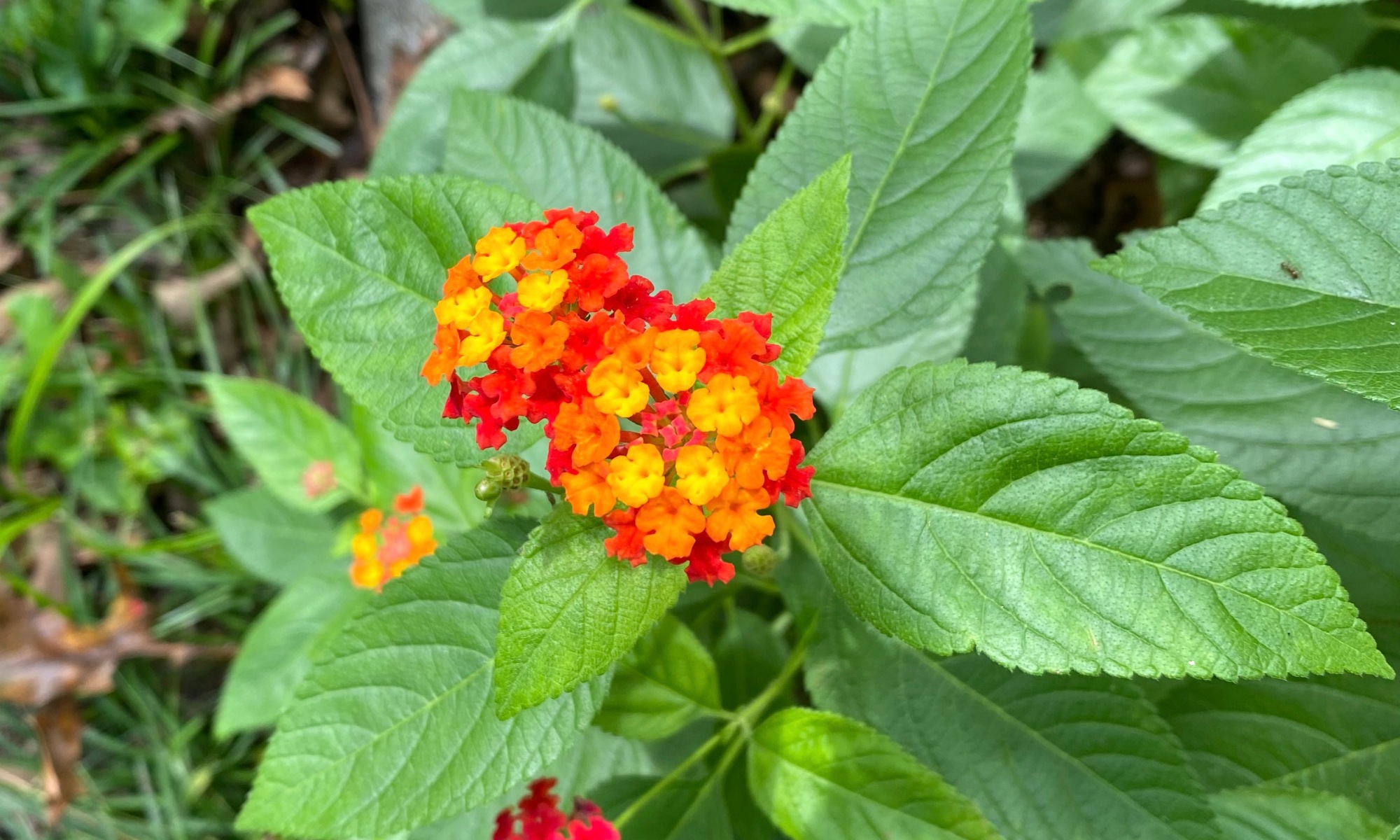 1. I have three natives, one invasive, and two basics for this week. I’ll start with the basics, or at least one of the yard basics for this area of the Southeast–lantana. Bees, butterflies, and even occasional hummingbirds visit it. The perennial plants below are very basic big box varieties purchased three years ago. The closeup in the featured image shows their kaleidoscopic appeal in spite of their commonality. They have been faithful early fall bloomers for me, although another all-yellow variety has not done nearly as well. But that could have far more due to their location in a shadier area than due to anything inherent in the plants.

2. Notice that the lantana is growing next to Japanese anemone, which is my second “basic.” I really don’t have much to say about this lovely non-native that I have not said in previous posts other than that its delicate, graceful stem and bloom pattern continues to communicate calm and hope to me. And both of those are dearly needed these days. I guess I could add that I also appreciate that the flowers continue to provide for bees well into October.

3. The first of three natives is narrowleaf silkgrass or Pityopsis graminifolia. This is a southeastern US native that I first noticed when I bought the lake house over 25 years ago. Then, there were several more plants along the west side of the lot; unfortunately, the place where they grow has been well traveled by 25 years of dog paws. Clearly, I need to better protect the surviving patches. Even when not in bloom, the silkgrass’s silvery thin leaves are attractive and worth fostering.

4. Another native grows close by and is also in flower throughout the wooded part of the garden. Last post I included the perennial wildflower tall rattlesnakeroot (Prenanthes altissima). This week I have white snakeroot (Ageratina altissima). Native to eastern and central North America, it is also called boneset and sounds medicinal; however, a little research shows it to be a poisonous perennial herb. So, I suppose snakeroot is closer to its character. Regardless, the bright white flower heads are attractive, especially against the increasingly leaf-brown ground.

5. The final native is Euonymus americana, commonly known as hearts-a-burstin. Its fruits are bursting out all over the wooded part of the garden, and I’m beginning to pull the plants out all over the wooded part of the garden. Also called strawberry bush, it is anything but bushy. Quite the opposite, it is leggy in this environment, as can be seen in both photos below. Moreover, it is prolific, propagating itself on long runners. After years of letting numerous plants grow just to see what they would look like in maturity, I am beginning to cull them out. I’ve kept a few tall specimens, clearing out the small plants around them, although they tend to get lost against the trees and shrubs that form their backgrounds. The four plants growing next to the white side of the shed compose their best showing.

6. The invasive is related to Euonymus americana, yet I initially did not think of it as invasive, even though I confess that I have pulled volunteers up in lots of different garden locations over the years. A few minutes of casual research on this shrub finds that it is listed as “Not recommended” on several plant data sites, sometimes even with a red-letter warning “don’t plant this!” Nonetheless, burning bush, or Euonymus alatus, is a stunning landscape shrub in the fall. It turns a bright scarlet as you can see it beginning to do in the photos below.

I purchased this shrub in a gallon pot when I first began planting at the lake. I don’t think that I could purchase it today. It is officially listed as a noxious weed by the USDA due to its prolific seeding. The middle photo above provides evidence of its copious seed production. The photo on the right seems to illustrate another of its common names, winged Euonymus. As the seed emerges from its pod, the covering splits and folds to either side of the seed, forming “wings.” But, the name more accurately relates to its winged stem structure. Although not currently listed as invasive in Alabama, it is in nearby states, and I’m certainly not going to be potting seedlings up for the next Master Gardener plant sale!

That closes out my six for this Saturday, but readers can visit many more lovely gardens by going to the site of The Propagator, seeing his six, and following links in the comments. Guidelines for joining in this weekly plant parade will also be found there. In the meantime, good wishes go out to all those affected by the pandemic and those suffering from a hurricane season that is making its way destructively through the Greek alphabet this year.