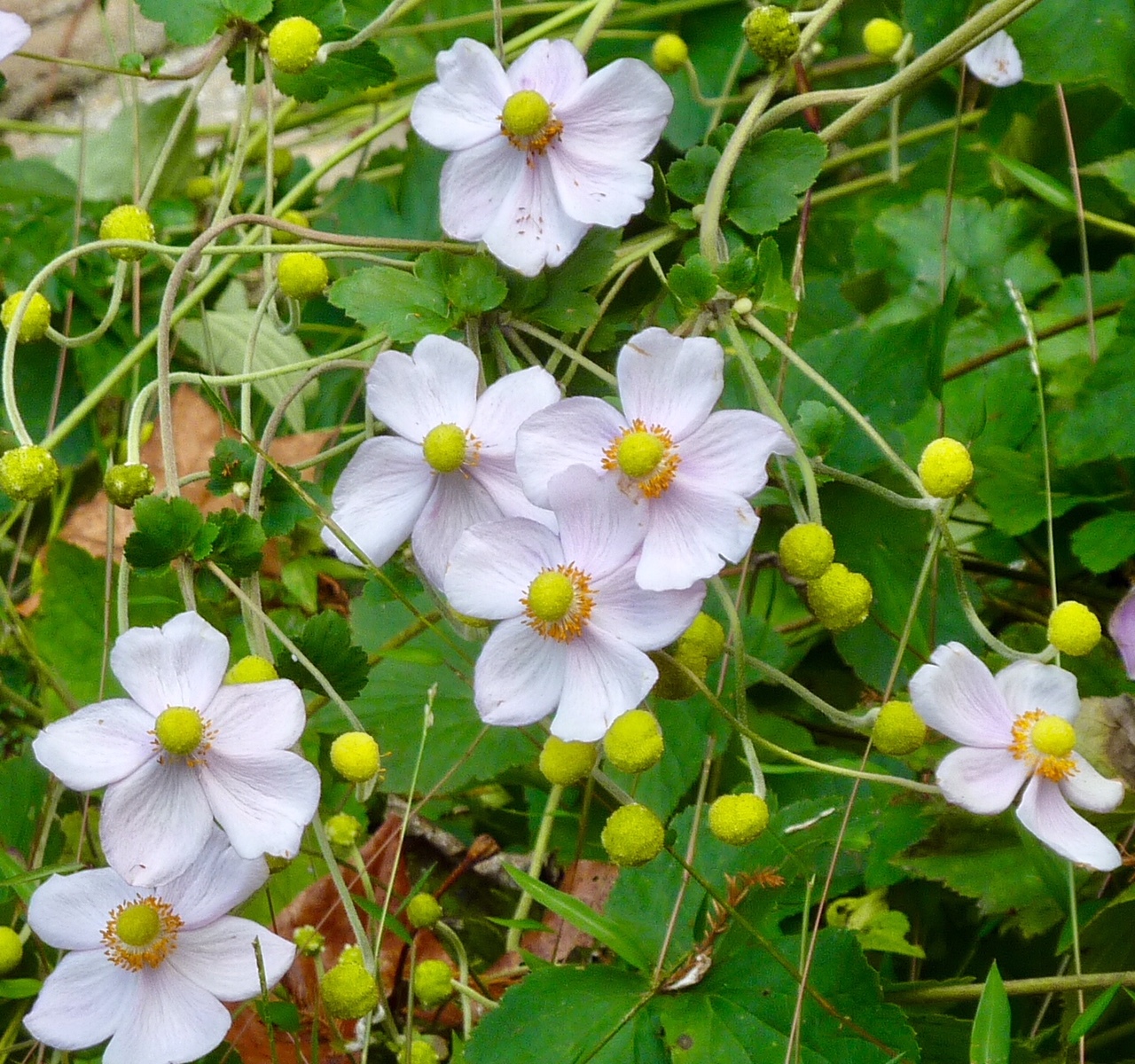 Being the holiday season, I thought that a post on garden books would be a timely plan.  And I had three very different, but good, books chosen.  Lorraine Harrison’s, How to Read Gardens: A Crash Course in Garden Appreciation, was the first.  A quick read with beautiful photos, the compact volume is filled with basic, but somewhat eclectic, information.  A Short History of Gardens by Gordon Campbell was the second. As an academic avidly interested in medieval literary and horticultural gardens, I have to say “short history” is a fitting title for a book that deals with the Middle Ages in fewer than three full pages.  Nonetheless, it is a smart volume with expansive coverage, a useful glossary, and bibliography for further reading.  Closest to the heart of After Eden was the third book, Gardens: An Essay on the Human Condition by Robert Pogue Harrison.  Reminiscent of the best of mid-twentieth-century intellectual writing, Harrison employs a wide literary, philosophical, and aesthetic palette to paint a picture of forces of destruction and cultivation that pervade the human condition.

That was my plan.  And then I saw this cottony, strawberry-like seed-decked pod in a small border garden at the lake.  Seasoned gardeners might recognize this as a seed 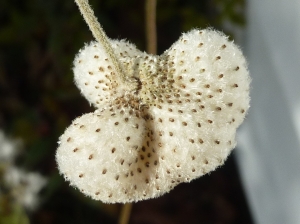 pod of the Japanese anemone.  I confess, though, that I had never really noticed them before.  I only have a few of these plants, and this year is the first time they bloomed in number.  Because of work and academic conferences, though, which had keep me away from the lake in the fall, I cannot be certain of what I have missed in the past.

More to the point of what I might have missed last year, is the plant that I have been infatuated with since at least 2006 when I first took

serious notice if it in the gardens of St. John’s College, Oxford.  Throughout England I have been drawn to its airy stem structure and its white, pink, and pale lavender color.  I tend to photograph it wherever I find it—at Rousham House gardens (2006), Oxford Botanical Gardens (2010), Broughton Castle, Oxfordshire (2010), in Oxford University Parks (2017), or at the Birmingham Botanical Gardens Japanese Garden where the featured photo above was taken this fall. 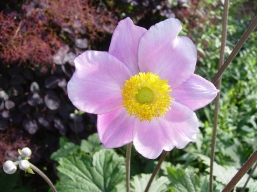 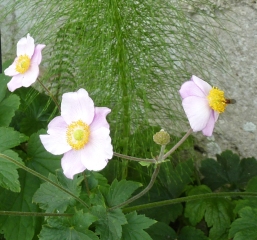 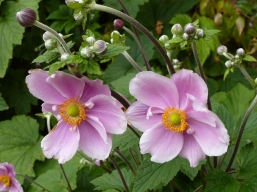 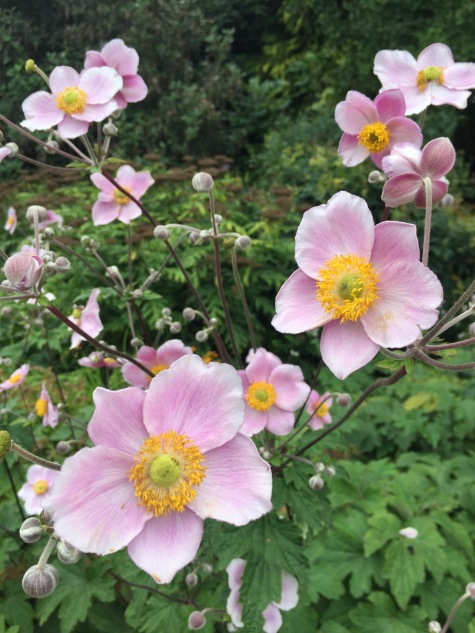 There are more than 100 species of anemone in the extensive Buttercup, or Ranunculales, family, and many of them are spring blooming perennials, but the later blooming Japanese anemone (Anemone hupehensis, Anemone hupehensis var. japonica, and Anemone × hybrid) alone holds my fascination.  Maybe it is because of the delicacy of the flowers or richly colored grape-leaf shaped foliage, or the way it moves in the wind—after all it is also called the windflower.  Or maybe just because it reminds me of summers in England.  But all of that is secondary.  The point here is the seed head and the fact that I never gave it any close attention before.

In fact, no one seems to notice it.  Unlike many anemone, this plant does not grow from a bulb, and it is typically propagated by division or by root cuttings so that the offspring stays true to its hybrid parent.  There are a few articles popularly available about cultivating the plant from seed, but all feature photos of the bloom rather than the seed head.  The one online article I came across that even mentions the seed head praises the Japanese anemone for looking “elegant at every stage, whether tight bud, long-lasting flower or neatly spherical seed head,” but provides no photograph of it among its several other attractive images.

But this overlooks a special type of beauty and, as the article states, elegance in these structures.  They are not exquisite. They are not bright. They are not colorful.  And until they mature and burst apart they are not particularly delicate. But once they do, they are airy, feathery, their dense cottony forms expanding into multiple graceful bodies of feathery airborne down. 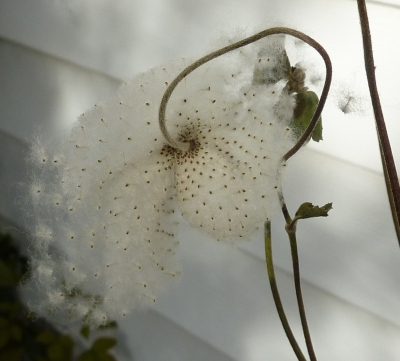 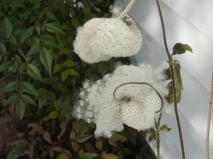 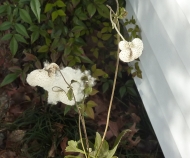 All of this made me think about people.  About how we might mature from exquisite bloom to airy disaggregation of downy bodies of influence.  About how we might possess a beauty unnoticed after the show of flowering, but a beauty that sends us out in a hundred tiny offsprings of being like so many wispy webs released to seed elsewhere—to take root or not.  About how the aftereffect of our most active lives, of our careers, of our actions too easily go unnoticed.  I cannot escape thinking of the aftereffect of teaching, of the former students who have commented on something I said, did, suggested, or encouraged that set seed.  So it is for all of us and what our life’s influence has scattered abroad.

Two months ago, about 100 yards from the plant pictured above, in an open spot in the path leading to the lake, I noticed grape leaf-like leaves that seem to be of a Japanese anemone.  If that is what it is, in fact, my plant must have set forth seeds last year.  Next autumn I’ll know for sure—and I’ll see whether the offspring is true to the parent or a new form altogether. 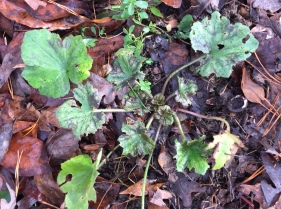 6 Replies to “bloom and seed”